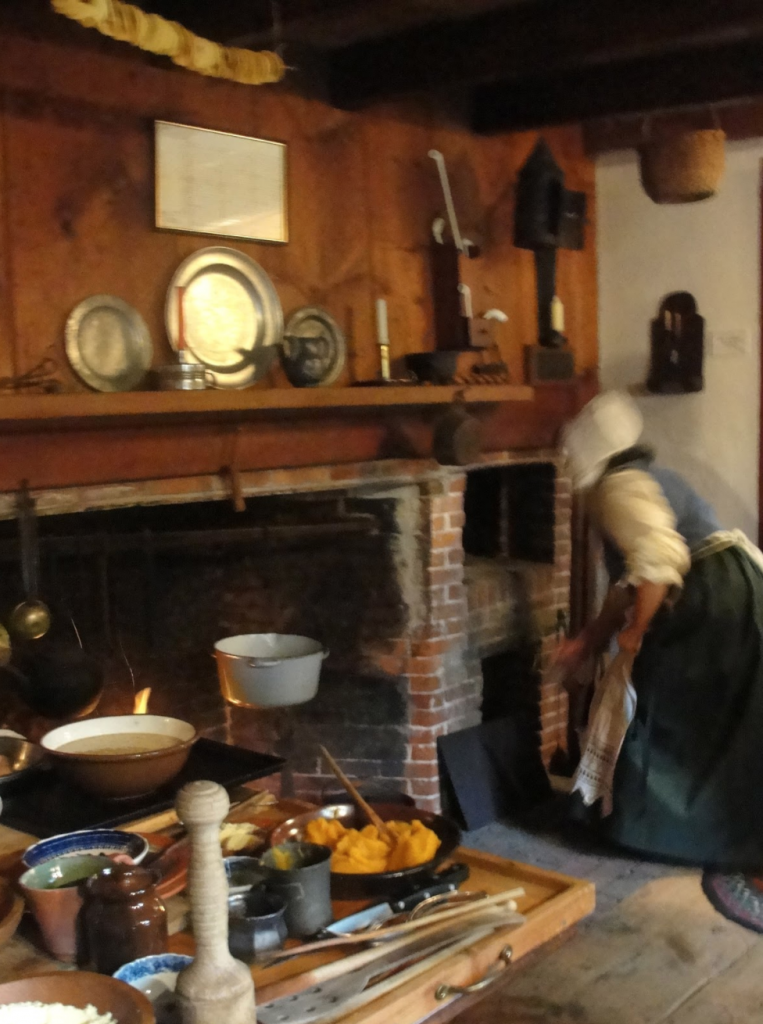 I admit it, I’m cold.  With temperatures below freezing day after day, I’m dreaming of lighting a fire in our cozy early 19th c. cape.  Oh wait, I can’t. Because a previous owner took the chimney down below the roof line on one chimney and the furnace is vented through the other.  Sound familiar?  Opening and using our chimneys is on my “to do” list.  Until then, I have to live vicariously through those of you who actually have working fireplaces.

There is one feature in the kitchen fireplace that I particularly would like to see working…. the bee hive oven.  I have visited Old Sturbridge Village and the Nye Family Homestead on days when they are demonstrating hearth cooking.

I learned that everyday baking, say some rolls for dinner, could be cooked on the hearth using a tin kitchen.  You’ve probably seen “tin kitchens” used to roast meat in the open hearth.  Some were fitted with a rack to allow a pie, rolls or cookies to be baked at the hearth.  However, one day a week, the bake oven would be fired up to do the major baking for the week.

The process involved building a fire in the oven (the upper chamber) which was vented by a flue to the chimney.    The fire would be fed until about an armload of seasoned wood was burned.  At the beginning, the metal oven door would be propped against the opening, allowing some air in.  When the wood burned to coals, the door would be closed to conserve the heat.  The process would take approximately 1 1/2 hours.  To test whether the oven was hot enough, a cook would put her hand in the oven and count.  If she could count to 20 without having to withdraw her hand, the oven was cool enough.  But if she could count to 30, it was not hot enough for bread.

Under the bake oven opening, there is another square opening.  This is the ash pit.  It is not vented with a flue and sometimes has a wood ceiling.  It is not meant to have a fire, or hot ash in it.   Once the oven is hot enough, the coals and ash are removed with a metal peel and put in a corner of the fireplace.
The oven floor is cleaned with a water soaked broom.

When the oven is at the proper temperature, the items that need to be cooked at a higher temperature, like breads and rolls are put in first.  They are followed by pies and cookies and finally baked beans.

Have you used your bake oven?  Please share your triumphs (and defeats!)

There are some upcoming classes offered at Old Sturbridge Village:

For more info on hearth cooking and baking:

“The Forgotton Art of Building and Using a Brick Bake Oven, How to date, renovate or use an existing brick oven, or to construct a new one“.  Richard M. Bacon, Alan C. Hood & Company, Inc. Chambersburg, PA Copyright 1977